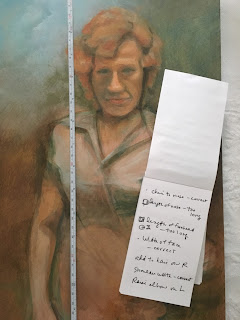 This is where it gets tedious, the point at which I want to quit and take up quilting. (Quilting isn't any easier, but it would be a distraction from painting.) The likeness is looking less like Frances than it did at the end of Part 3. I have to dig around to find my Glover genetic code and wave it around like a war baton, psychologically speaking. There will be no quitting now.

In an earlier post I stated it's a good idea to measure to make sure your proportions aren't out of wack. The arm still didn't look right and after a good deal of comparing measurements from the photo to the canvas I think I found the culprit. The bend of the elbow is lower than her waistline and it's throwing everything off.

Correcting a painting gets ugly before it gets better. You have to cover your mistake and start that area over. If there are paint ridges upsetting you, sand them. Do some correcting and then leave it alone. Come back to it, improve it, then leave it alone. Let the paint dry, otherwise you'll just make a muddy mess of it. Objectivity is really hard to maintain so I try to spend as much time looking at the painting at different distances as I do actively painting.
Two other items that need immediate correcting are the length of her nose and the height of her forehead. The nose gets altered by bringing the shadow down on the bridge. I bring her hairline down slightly. The nose and mouth are too wide but I'll address that when I'm ready to cope.

I have no idea how long it will take for Frances' likeness to be close enough to satisfy me. I will keep taking photos while I work but will not post again until I'm closer to completion. 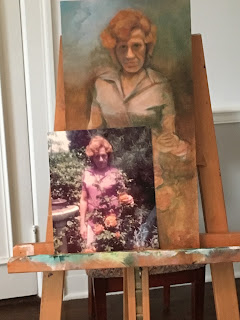 Popular posts from this blog

August 01, 2018
Commissions are interesting endeavors. A bespoke painting often means an artist is asked to create something quite different from their regular body of work. It pushes us a bit outside ourselves. Without fail I find it refreshing and deeply rewarding. Some artists specialize in pet portraits. I enjoy doing figure studies and portraits of people but until now I had not painted anyone's pet. "Gizmo" is the Maltese-Yorkie companion of Katie Ruth Williams. And like many diminutive creatures, his personality can barely be contained. This bite-sized Napoleon strives to rule the household. I can't say how successful he is at that but I do know Gizmo is loved. Such a subject deserves a portrait. I wanted Gizmo's likeness to be larger than life—more than double his size—and grand as an Elvis on velvet. Thanks to snapshots by his adoring family, I had plenty of references from which to work. This piece was pure joy. I look forward to many others. "Gizmo&
Read more
July 03, 2018
"Practice makes better" is what we tell the five-year-old. When the child is older, I will explain (and repeat) the 10,000-hours-towards-mastery concept. I don't believe in Perfection. Mastery allows for experimentation to continue and recognizes two important things: the time one must invest in order to improve and that failure is a necessary part of achieving success. Portrait painting has been the most difficult thing I've attempted. It's positively baffling to me. I can't work from one photo. Working from life is ideal, but my current subject (my grandmother) is no longer living. A wall of photos of a person from different angles, different decades (like I'm some sort of stalker) is better for me simply because a single photo rarely captures a personality.* I believe a painting of someone can express who a person truly is by combining impressions from many, many moments. *Of course there are master photographers who CAN capture the essence of
Read more
January 11, 2017
A New Portrait Ever since my grandmother Frances passed away I have been thinking about her portrait. I knew I would do one at some point when I felt ready. Ready in this instance means that she stopped appearing in my dreams. It has been a year since I've seen her while I've slept. People look different in heaven. It skews my ability to represent them as they were before. I'm not trying to weird you out, it's simply how it is with me. It is impossible to show how I go about this portrait without revealing quite a bit about Frances, and of course, myself as well.  Tant pis.  We'll try to bear it. I will post photographs at the end of a painting session to show progress with some mention of the decisions made along the way. It is my hope to demonstrate the mental exercises an artist goes through, a few practical techniques of putting paint down, but most of all, the amount of time it takes to create something in paint. I chose my panel back in the summer. I
Post a Comment
Read more

Original Art as the Antidote for Contemporary Life